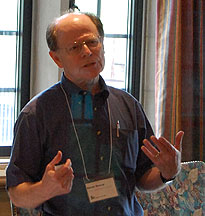 IU School of Journalism professor David Weaver described his research and gave his answer to the question, “The Global Journalist in the 21st Century: Are U.S. journalists really that different?” at the June meeting of the  Bloomington Press Club.

The short answer is “no,” based on Weaver’s findings, but in his survey of more than 30,000 journalists in 31 countries, he and co-author Lars Willnat found plenty of ethical and practical differences.

“There may be no typical global journalist, but there are some signs of increasing agreements with some of their roles,” said Weaver, who has studied the lives of American journalists before, collaborating with several IU faculty over the years to publish four books that report on the journalist’s experience in different decades.

Weaver and Willnat will report the latest findings in the second edition of The Global Journalist in the 21st Century: News People Around the World, to be published this fall.

For the press club presentation, Weaver showed charts to describe the findings, which were gathered over two and a half years from surveys conducted independently in each of the countries. They looked at demographics, such as gender and nationality, as well as attitudes. Survey responses ranged from strongly agree to strongly disagree. 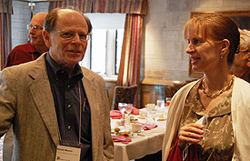 Weaver said the differences rest on the country’s politics and government, as well as cultural differences in the profession. This is why the authors recruited 80 chapter authors who live, work and teach journalism in those countries, to explain the data for each country.

“We can’t predict how journalists will answer based on the country they are in, though,” said Weaver. For example, Sweden and Demark are similar geographically and demographically, but the journalists surveyed had very different responses.

“You have to know the history, how journalists relate to government,” he said. “We asked chapter authors for explanations about why journalists in their countries replied a certain way.”

This entry was posted on Friday, July 1st, 2011 at 11:23 am and is filed under Guest speakers. You can follow any responses to this entry through the RSS 2.0 feed. Both comments and pings are currently closed.