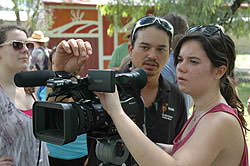 Exploring the outback, meeting Aboriginal journalists and trying out local dance and cuisine are just a few of the adventures IU journalism students shared with members of the Bloomington Press Club at the March 28 meeting.

Associate professor Michael Evans’ class visited Australia over spring break to learn about culture and media “down under.” He brought eight students with him to talk about their experiences and show photos from the trip.

Evans, who has conducted research on the Inuit people of the arctic, has long been intrigued by Aboriginal peoples, especially those with active media groups. When conducting his own dissertation in the Arctic, other researchers suggested he also examine native culture in the outback of Australia. After several trips to do just that, Evans decided journalism students could benefit from the experience as well.

As they showed slides, students talked about what they saw. Lieran Ehmke talked about watching kangaroos – and later eating kangaroo meat. Chaz Mottinger explained how she and another student received instruction on video cameras while visiting the CAAMA Aboriginal media outlet in Alice Springs. Kourtney Liepelt recounted the camel-riding experience.

The luncheon was a day to celebrate IU journalism students. In addition to the Australia contingent, several other students who helped create a magazine last fall attended. Nancy Comiskey, their instructor, explained that the students collaborated on everything from design to content to editorial decisions create 812 magazine, which explore southern Indiana culture. The spring course students are hard at work on the next issue, she said.

The next meeting of the club is April 25 at the Wells House, Jordan Avenue and 10th Street, and guests will be five area journalists and professors who traveled to China to attend a conference in Shanghai.

This entry was posted on Sunday, April 3rd, 2011 at 5:11 pm and is filed under Guest speakers. You can follow any responses to this entry through the RSS 2.0 feed. Both comments and pings are currently closed.